Pawar meets PM Modi, talks Shah's new ministry and Banking Act - E-Today Online
Top Posts
fifteen Most useful Totally free Hookup Applications 2022:...
What Should you Understand a great Pisces Child?
Here, she found the love of this lady...
Was kik application noted for intimate hookups and...
step 3. As to why did broker organizations...
The brand new world now gives the ‘high...
Outside of the People: Many years Differences in...
Our very own goals, ourselves: automated study off...
Should you want to determine their matchmaking, you...
You’re using a keen unsupported browser which may...
Home » Pawar meets PM Modi, talks Shah’s new ministry and Banking Act
Politics 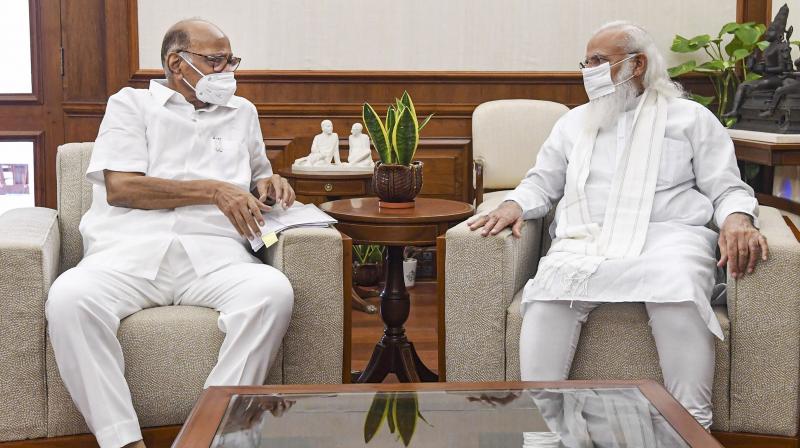 Mumbai: NCP chief and former Union agriculture minister Sharad Pawar on Saturday called on Prime Minister Narendra Modi in connection with the newly formed Union cooperative ministry. In his closed door meeting, Mr Pawar has also given a letter to the Prime Minister pertaining to amendments in the Bank Regulatory Act to limit rights of cooperative banks. The meeting went on for about 45-50 minutes. There are also reports that both the leaders discussed the political situation of Maharashtra. The NCP chief met the Prime Minister almost 20 months ago.

The former union agriculture minister flagged his concerns on the ministry of cooperation. In his letter, Mr Pawar pointed out several flaws and inconsistencies in the Banking Regulation Act. He said that incorporation, regulation and winding up of co-operative societies, were preserved as a ‘State subjects’ under Entry 32 of List II of the VII schedule of Constitution of India.

Referring to Supreme Court judgments in his letter, the veteran politician said that any attempt of interference by the Union will be a breach of the Constitution.
In a series of tweets, Mr Pawar also said, “Through a letter, I have drawn the kind attention of our Hon’ble PM towards issues and conflicts in the wake of certain developments in the co-operative banking sector. Although the objects and reasons for amending the Act can be lauded, I wish to point out certain inconsistencies and the resulting legal inefficacy of normative provisions of the Act that are in conflict most specifically with the 97th Constitutional Amendment, State Co-operative Societies Acts and with the Co-operative Principles. (sic)”

In another tweet, the former agriculture minister said, “I reiterated in the letter that the aims and objectives of the Amended Act are well-intentioned, and many provisions are necessary. Erring Board and Management must definitely be acted upon strictly and the depositors’ interests should be protected, but at the same time it should be ensured that while doing so, the Co-operative Principles laid down in the Constitution are not sacrificed at the altar of over-zealous regulation.”

The meeting between both senior leaders also assumed a political significance as there are reports of a strain in the Maha Vikas Aghadi (MVA) coalition government- Congress,NCP and Shiv Sena in Maharashtra.

It is pertinent to note that In November 2019, when a presidential rule was imposed in Maharashtra, Mr Pawar had met Mr Modi on pretext of farmers’ issues and both the leaders had also had a discussion how to give a stable government in Maharashtra as an old ally of the BJP, Shiv Sena had snapped its ties over chief minister’s post. Mr Pawar had admitted the same after the MVA government was formed

Govt plans slew of bills in Monsoon session; Oppn to corner it over Covid management

Threat of a split looms for Congress